Tullahoma was founded in 1852

Tullahoma’s rich history began first and foremost with agriculture. As technology has changed, so has Tullahoma. Once a major railway thoroughfare, Tullahoma continues to be an industry leader in aerospace and is now home to entrepreneurs in a wide variety of fields, including engineering, health, and education. Nestled between two lakes and a short drive to several state parks and natural areas, the citizens of Tullahoma spend their free time enjoying the landscape's natural beauty.

Tullahoma has always held an important place in our nation's history. Native Americans crisscrossed the area as it was known as a plentiful hunting-ground. Later, the westward expansion of the United States brought new and lasting influences to the area. After Tennessee obtained statehood, new technologies such as the railroad were extended into the area and Tullahoma became an important stop on the railroad from Nashville to Chattanooga.

The construction of the railroad became the impetus to the creation of a new community by several founders including General William Moore and Pierce Anderson. They gave the new town the name Tullahoma and it was chartered in 1852. The town grew steadily and the nearby springs became the focal points of several health resorts.

Tullahoma and its citizens did not escape the sectional troubles that became the Civil War. When Tennessee seceded, Confederate units were formed from the young men of the community. After the battle of Murfreesboro, Tullahoma became the site of General Braxton Bragg's headquarters of the Army of Tennessee. The tenure of the Confederate army at Tullahoma from January through June 1863 was to become the longest undisturbed encampment of any Confederate army during the war. It lasted until mid-summer when Union General William S Rosecrans executed his masterful Tullahoma campaign, forcing Bragg to give up the town. Over four hundred Confederate soldiers remain in Tullahoma to this day, buried in Maplewood Cemetery, victims of war, sickness and disease.

The war devastated the area and growth during the next half century was steady but slow. The State of Tennessee established Camp Peay as a national guard training camp in 1926. Before the Second World War it was transferred to the Federal government and merged into Camp Forrest, which became one of the largest army bases in the United States. Tullahoma was in the heart of one of the largest training areas and the 1941 Tennessee Maneuvers included General George S Patton.

After the war, Camp Forrest was selected to be the site of the Arnold Engineering and Development Center. Tullahoma met the important site selection criteria which included easy access to major transportation routes, an inland location away from major natural disaster threats, and its proximity to the relatively inexpensive power produced by the Tennessee Valley Authority. When President Harry Truman dedicated the Center in 1951 he stated, "The great industrial progress of Tennessee, and of the whole South, makes it possible to build this key defense installation in this area."

The most advanced and largest complex of flight simulation and test facilities in the world, AEDC operates 58 aerodynamic and propulsion wind tunnels, rocket and turbine engine test cells, space environmental chambers, arc heaters, ballistic rooms and other specialized units, of which 27 are unique to the United States and 14 are unique in the world.

It continues its operations today as part of the United State Air Force Materiel Command and has been the test and evaluation facility for aerospace and aviation through the Cold War, the Space Race, and the War on Terror. It remains the area's largest employer.

Today, Tullahoma is a hub for aviation, aeronautics and avionics activities and industries. The University of Tennessee Space Institute is a one-of-a kind educational and applied science facility. Engineers and technicians in Tullahoma created the X-43 as part of NASA's Hyper-X program. The unmanned experimental hypersonic aircraft design achieved a speed of Mach 9.68 during a 2004 test.

William Northern Field at the Tullahoma Regional Airport is the state's sixth largest general aviation airport and the nearby Beechcraft Heritage Museum houses a large collection of Beechcraft and related aircraft. The Goodrich Landing Gear Division in Tullahoma supports commercial, military, regional, and business customers throughout the world.

Tullahoma also has heavy military involvement with Arnold Air Force Base being a part of the town. "Known as “the best kept secret in the Air Force,” Arnold Air Force Base is nestled in over 40,000 acres in Tullahoma and is the only active-duty Air Force base in the state. More than 5,500 active duty, members of the guard, reservists, retirees, veterans, and their families bring their wealth of knowledge and experience to the Tullahoma area." In early 2022, Tullahoma was recognized by the Association of Defense Communities as a Great American Defense Community due to its involvement with the Air Force base. This is an exciting achievement of Tullahoma, as only 34 cities nationwide have been awarded this recognition. 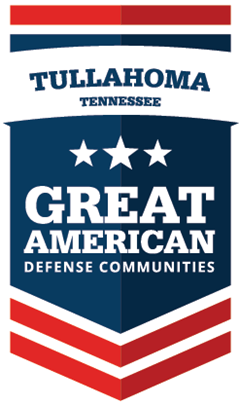